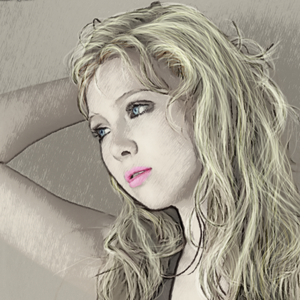 Physical Description of Persona:
Pierka is petite even for her age. She doesnt yet top 5 feet but shes still growning. Her figure is youthful and still a little boyish though she shows signs of a fuller and rounder figure in the future. Her hair is blond streaked even lighter by the sun as she has spent most of her time out of doors with the dolphins learning her craft. Her eyes are blue and lips full.

She has a scar down the back of her left shoulder from where she was Threaded in a Fall.

Emotional Description of Persona:
Pierka is vibrant and alive with enthusiasm for the world around her. She makes friend easily though shes also temperamental and can explode unexpectedly. Shes open to new things and adventures. Basically, she's a teenager.

History of Persona:
Pierkas parents were seacrafters or so it is thought. One of the boats that washed ashore near Topaz Sea Hold after the big storm of Turn 3 held the girl barely hanging on to life along with several others who were not so fortunate. When she awoke she didnt seem to have any memory of what had happened to her. She did show a good solid knowledge of ships and dolphins for one her age. When tested it was found that though she had no memories she could access she could read and write and recite her Harper songs with the rest of the children. She begged to be taken with the Dolphineers when they moved to Dolphin Cove.

She has since worked hard as an apprentice though she has constantly sneaked off to the Weyr whenever she had some free time. One day when she was up staring at dragons a blue swooped down and stared at her. The rider chuckled and handed her a slip of hide and told her to take it to the Headwoman if she wanted to ride a dragon.

Pierka was ecstatic when Liddith found her on the Sands at the next hatching. And though she had to stay in the Weyrlings wing a bit of extra time while she matured she is as fierce as her lifemate at protecting Pern. She was finally transferred to the Weyrleaders wing when tragedy almost took her life and his. Pierka and Liddith were scored and fell from the sky only to be caught by N'vanik and Loseth, injuring the Weyrleader in the process.

A friendship with T'nom turned deeper for Pierka and they spent some time together at Turn Over, but when his lifemate won Elleth's flight his attentions were turned fully to the goldrider to the exclusions of all else.

Pierka found herself pregnant and the only possible father in love with another woman. During her pregnancy Pierka found support in an unexpected friendship with Bronzerider Z'ku. Unfortunately he was also in love with Meledei. It was only after the goldrider chose T'nom that she found her own relationship blossom. So when her son was born in m6 of turn 7 she included a 'z' in his name. Soon after, she and Z'ku weyrmated.

At another Weyr, a sister she couldn't remember impressed Gold and then through a series of events found Pierka. She has since found the rest of her family and recovered her memories.

Dragon's Name: Liddith
Dragon's Age: 4
Dragon's Colour: Green
Next Mating Flight: m1 d7
Description of Dragon:
Liddith is quite petite but perfectly formed in every way. Her color is almost a gem like peridot green with only a slight striping of a darker shade on her flanks. The striping can be seen best in the sunlight.

Her personality has yet to assert itself but there is no doubt that her rider is the most important thing to her on all of Pern.