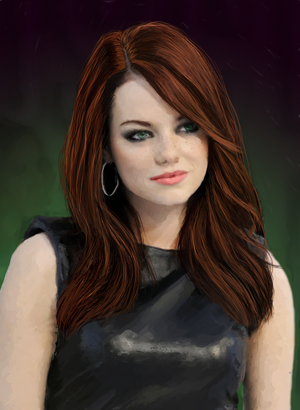 Physical Description of Persona:
Oria is petite, about 5'2" tall and weighing roughly 130 lbs. She has shoulder length strawberry blond hair which is usually worn tied back into a ponytail. She has green eyes and is covered in freckles from the sun.

Emotional Description of Persona:
Oria is a very laid back girl, this can give the impression that she is not perhaps taking part in what's going on around her, but in reality she is taking everything in for later reference. She's very easy to talk to, that helps in her chosen craft.

It's very hard to anger her but when you do watch out because tact and diplomacy go out of the window, but then she is still a teenager!

History of Persona:
Born at Telgar (tm) she was the youngest of five children, and the only girl born to Fisbek and Dhoaera. Her mother died when she was only 7 turns and the young Oria could only watch helplessly as there was nothing that the local healers could do to help.

Fisbek retreated into himself and his sons, largely ignoring the girl, who soon realised that she had to look after herself, no-one else was going to.

At 12 years old she persuaded her father to give his approval to her becoming an apprentice healer, something she excelled in. After 3 years she was approached the healer going south to Dolphin CoveWeyr as Weyrhealer, a promotion to senior apprentice would follow on accepting the new assignment.

Dragon's Name: Degrorth
Dragon's Age: 8
Dragon's Colour: Green
Next Mating Flight: m11 d10
Description of Dragon:
Degrorth is on the smaller side for a green, her hide is a shade of green resembling grass with a light covering of frost early in the morning. She's quite curious and talkative, always wanting to know how and why.

Dhory, Green Firelizard: aged 11, hatched m9 d9
Next Mating Flight: m13 d6
Oria impressed Dhory just after she apprenticed to the Healers. She is of average length for a firelizard and has a yellow tint to her hide. She seems to have more intelligence than most greens, Oria has her well trained and she is usually close to her mistress.