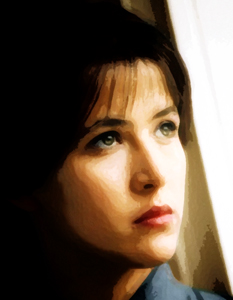 Physical Description of Persona:
Humari is has dark auburn hair that falls to the middle of her back in sleek waves and golden brown eyes. Her heart-shaped face is accented by a high bridged nose and a mouth with a thin upper lip, but a fuller lower lip. Her facial features are striking rather than overtly pretty.

She has her mother's slim, delicate build, but has been gifted with a little more bosom that has yet to be matched by her hips.

Emotional Description of Persona:
Humari had been a friendly, outgoing child until she became nearer to marrying age. It was then that she became quieter, more muted in personality and far more melancholy. Her spark has been diminished by fear of her mother and fear of being discovered.

Now she is quiet, meek and biddable, but there is little life in her eyes.

Her marriage to Taril has enabled her to blossom more than she would have been able to under her mother's not so tender graces. Slowly, she is beginning to smile more and now that she is allowed to speak, beginning to reveal her wit and strong opinions more often.

History of Persona:
The daughter of Sunstone's Headwoman Yriadha, Humari grew up sheltered and mostly happy. Cosseted by the majority of the hold, she was a mischievous, happy child. It wasn't until she grew older that she knew that something was wrong with her. Unlike the other girls her age, she wasn't mooning about the handsome boys as much. Though she was often attracted to the young men, her eyes more often sought out her own gender.

At first she was horrified, then curious. At the young age of 15, she fell into puppy love with another girl, Vreena. For months, she was happy, especially when Vreena claimed that she felt the same. They explored each other and their feelings for each other; Humari had teenaged, starry-eyed notions of them both running off together to live happily ever after.

Unfortunately for them both, perhaps worse for Humari, they were caught by Humari's brother. When confronted by Yriadha, Vreena claimed that Humari had started it and she had had wanted little to do with it. Heartbroken, Humari bore the brunt of her family's rage. She was beaten about the back and bottom until badly bruised; her mother left no doubt as to how shameful her actions and Humari herself had been.

In an effort to hide what she saw as Humari's perversions, Yriadha quickly found a match in Taril, a disfigured but wealthy man of the Hold. Before Humari could blink, she was betrothed. She found Taril to be kind, but could not bear the thought of him seeing her as a disgusting perversion, so she attempted to avoid the marriage by finding passage on a boat to the Weyr.

She was caught by her brother, Yarmel before she could even barter for a ticket. Beaten about the back by both her brother and her mother until she bled, Humari was drugged with fellis to await her wedding. Yriadha made sure that Humari was given enough fellis during her wedding to ensure that she went through with it and was biddable.

Her marriage to Taril has proven to be an affectionate, though sometimes awkward one. Not always sure what to do with each other, Humari finds the relationship to be one of contentment, especially now that she proved to be immediately fertile. She struggles against her mother's influence still, but is beginning to show that when it comes to her husband, she is developing a backbone and pulling out inner strength that she never realized she had.

Jib, Bronze Firelizard: aged 1, hatched m10 d27
Jib is a large, muscular young flit, even just out of the shell. His coloring is even along his entire body, a deep bronze that gleams with health. He's affectionate and intelligent, rarely straying from Humari or Tumaril, often taking it upon himself yo watch the young child while his pet is busy.