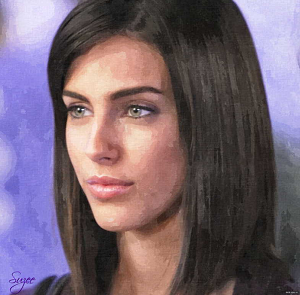 Physical Description of Persona:
Nazli is small. At just over five feet she has to look up at most people. Not only that but her bone structure is delicate. She has green eyes framed by dark lashes and brows. Dark straight hair frames her face. Her skin is nearly flawless with natural blush and rosy lips.

Emotional Description of Persona:
Nazli is timid. She has been the majority of her life and the abuse she has suffered in the past has not prepared her for a normal life. She rarely smiles but that is understandable in her situation. She has folded into herself and doesnt communicate easily with anyone of the opposite sex. When she wants to appear different to those around her she acts like someone else.

History of Persona:
The daughter of a hold woman and a dragonrider, Nazlis early life at a minor hold was extremely difficult. Her mother was ostracized and disowned by her family and their existence became difficult. When she passed away, an uncle and aunt took her daughter in.

Nazlis life became worse with hard work and unreasonable punishment. Her uncle was particularly vicious and by the time she was 20, it was obvious they never intended her for any more than an unpaid drudge. When her uncle began nightly assaults she finally gained the fortitude to run.

She ran to Amber Hills and found work as a laundress. At least there she had a warm bed and food. Over time she learned to trust the headwoman who pulled the story out of her. Then when the Lady Holder returned from her ordeal, Nazli was promoted to serve her. Her unique life experience helped her understand Benani and Benani understood and protected Nazli. The two of them became good friends.