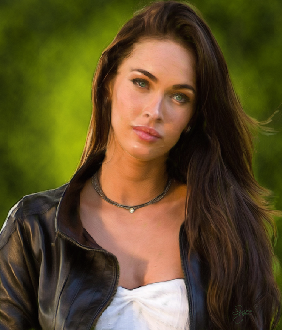 Physical Description of Persona:
Kapera is around 5'11, and has long legs, a tiny waist, and a large bust. She has features that appear hardened. Her emerald eyes boast long lashes, and her eyebrows are long, thin, and elegant. Her nose is small and pointed. Her skin is pale by natural complexion, but tanned by riding, and she can burn if not careful. While working she wears practical clothes. Whenever she can, however, she prefers to wear decorative clothes that accentuate her chest and legs. Her preferred colors are green and silver and she wears them as often as she can.

Her hair is a deep black and falls to her rear end. She knows that it is impractical for a dragonrider to boast such long hair, and she has to spend much time carefully weaving it into a style that is both attractive and high enough that it does not fall down past the nape of her neck, especially on Fall days, when it needs to be tucked under a helmet, but she doesn't mind the time it takes. Long hair is one of the luxuries she permits herself.

Emotional Description of Persona:
Kapera is a changed woman. Injury to herself and her dragon and the ensuing few Turns of recuperation have seasoned her. Kapera is smarter than her pretty face might imply, and she has become responsible and driven to the point of going above and beyond what's assigned to her. Her ambition has been tempered, and she's learning how to focus on the broader pictures and greater good. A talent for mediation is slowly emerging as well.

That's not to say she's a paragon of goodness. She still struggles with being vulnerable in front of others, she can be stubborn, and she has to fight her natural habit to keep secrets and be defensive. She's still mercurial and capricious in her feelings and personal life, quick to emotional extremes, but she's learned to rein them in.

History of Persona:
Born on Turn's End, Kapera was the younger Blood child to the Holders of a large and wealthy minor Hold. Kapera does not speak of the fact that her parents favored her sister over her, but it rankled her constantly, making her become bitter. As a teenager, she eventually ran away, going through several places before making it to the newly-opened Windswept Islands Weyr.

She was Searched when she arrived. As soon as she set her eyes on the gold egg, Kapera knew she would Impress it. She applied herself to her goal, and was rewarded when Riyanth broke free of her shell and headed straight for Kapera. She expected this would make her fawned and doted upon with the prestige. She was unprepared for weyrlinghood's demands of workload and responsibility, and adjusting to the dragon and rider bond was very difficult for her.

During her time at Windswept Islands, Kapera developed the attitude that women were rivals and men were to use before they used her. The small island Weyr became over-crowded with golds and when opportunities stagnated, Kapera became irritated. She wanted more power, more to do. As it stood she was just another goldrider, and she didn't want that. She wanted to be a Weyrwoman, or a Weyrwoman's Second.

A transfer to a devastated Dragonsfall in Turn 3 to replace a deceased gold was unexpectedly life-changing when Riyanth rose first. She served in the Weyrwoman role, performing adequately, though she was mostly propped up by a competent second and an extremely experienced first Weyrleader. This ended in Turn 4, when a virulant illness of the lungs confined her to bed for months and forced her eventual transfer back to the tropical climate of Windswept Islands - as a regular goldrider.

Further tragedy struck in Turn 6, after she returned to the queen's wing, when Riyanth was injured while catching a badly scored bronze dragon. For some time they thought she might never take to the air again. With Riyanth cleared to fly and Windswept Island crowded with golds, she transferred to Dolphin Cove Weyr in Turn 7. While she presented confidence and a willingness to serve, privately Kapera had doubts if Riyanth would rise, or if Kapera would be a retired goldrider before she was thirty. The move turned out fantastic for her. Becoming Cyradis' Second and serving under the older goldrider gave her the final polish and mentoring she needed.

Dragon's Name: Riyanth
Dragon's Age: 11
Dragon's Colour: Gold
Description of Dragon:
Riyanth is a fairly large gold, long and surprisingly sleek, a racer as opposed to a burdenbeast. Her color is a deep antique gold. She bears heavy white scar lines on her wing from where a wounded bronze clawed her during a catch.

Riyanth is a classic gold - demanding and possessive. She has strong opinions. and never hesitates to share, whether it's asked for or not. She often tries to intervene in her rider's life and arrange it as she sees fit. She is an incessant flirt and spends most of her time taunting the males. Nothing makes her happier than influence, and everyone adoring her.

Riyanth is wild and uncontrollable and known for changing mates repeatedly in her flights. When it comes to her clutch Riyanth is massively protective - anyone who wants to see her eggs is going to have to practically beg her for permission. Anyone except her rider will have a hard time seeing her eggs, and she needs her rider around all of the time. She has a surprising maternal streak towards young dragonets which fades as they age.